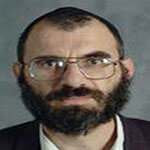 Daniel Michelson was born in Riga, Latvia, in 1949 to parents who survived the Holocaust. In 1971 he graduated in Mathematics from Moscow University and emigrated to Israel. From 1972-1980 he taught Mathematics at Tel Aviv University, studied toward a doctorate and served in the army. Upon completing his PhD thesis in Applied Mathematics in 1980, he did postdoctoral research at the University of California at Los Angeles. In 1983 he was awarded fellowships from the Alfred P. Sloan Foundation and from the Igal Alon Foundation. In the fall of 1983 Michelson returned to Israel and began teaching at the Hebrew University. There he learned about the Torah code phenomena from his colleague and friend Dr. Eliyahu Rips. Later he became involved in researching the Torah codes and lecturing about them, particularly when he was living in the Los Angeles California area. Currently, Michelson is an Professor in the department of Computer Science and Applied Mathematics at the Weizman Institute, Rehovot, Israel.

Professor Michelson’s academic research involves differential equations that are used to describe a continuous media like the atmosphere, ocean waves or flames. His purpose is to narrow the gap between the applied mathematicians that derive appropriate models but solve them only approximately, due to shortcomings of the means of computations, and the theoretical mathematicians that can provide rigorous results but for equations that are far away from the physical reality. Narrowing the gap is done with computer assisted proofs. Here the computer estimates its own round-off errors and thus is able to provide rigorous results. Using this technique he was able to analyze the stability of Bunsen flames and design accurate schemes for computing shock waves that arise in aerodynamics. Recently he became involved in the study of predictability of lunar motion and verification of different events in the remote past. In particular, Professor Michelson was able to explain the strange orientation of the walls of the Temple Mount in Jerusalem.