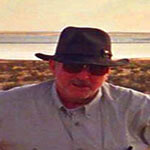 Barry Roffman was born in Philadelphia, PA on May 22, 1947, graduated from Northeast High in 1965, and from Temple University in 1969. In December 1968, at the University of Pennsylvania, he earned his first commission in the U.S. Navy.

Lieutenant Barry Steven Roffman served ten years in the Naval Reserve before being honorably discharged in 1979. He served on 5 aircraft carriers, 4 destroyers, an amphibious communications command ship, and a minesweeper. After active duty in the Navy, he taught science in Dade and Palm Beach Counties in Florida.

He has a great love for writing and research, and has authored three books. One published in 1978 dealt with comparative religion, the second in 1989 dealt with a custody battle, and the third book Ark Code, Searching for the Ark of the Covenant using ELS Maps from the Bible Code is currently for sale, at Amazon.com.